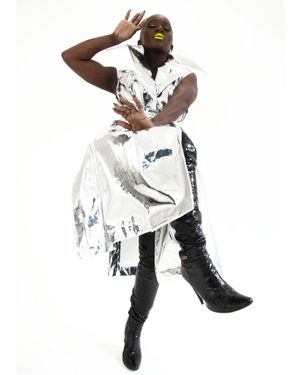 "....and do her thing Renee does, unleashing a voice of breathtaking dynamic range, from a sharp whisper to a hall-filling shout, stacking harmonies and textures while that band drives on."
-The New Haven Independent

"Since 2018, Stout released several singles and an EP which is steadily electrifying stages across the world, while transforming her listeners."
-MALVIE Magazine

"Her debut album 'Anomaly' seamlessly threads a unique blend of pop, rock and r&b that sets her apart from her contemporaries."
-ThisisRnB

STOUT (Denise Renee), a singer born and raised in New Haven, CT began her musical endeavor at the age of 3 in her great grandmother's basement church. She began playing the drums for church service, then moved to singing in the children's choir. The passion for performing became a constant motivating force.

She went from performing at local church concerts, musicals, and services to landing a job as a backing vocalist for Alicia Keys, from 2003-2006.

In 2015 she released her debut album "Awakened" under her former artist name “Denise Renee”. The album charted #11 on the Billboard Gospel Charts. In 2016 she began performing, vocal directing and contracting for the multi-talented Childish Gambino. She performed on Jimmy Fallon, The 60th Grammy Awards, Radio City Music Hall, and more, with this incredible artist! In 2017 she joined Cory Henry and The Funk Apostles and the STOUT revolution began! She’s been touring the world with this band, spreading love, freedom, and electrifying music.

After supporting artists, while juggling parenthood and her artistic pursuits, she stepped out on her own and launched her solo career. In 2018 she released her debut single “Queen”  (written, arranged, produced by STOUT, with co-production by producer / artist, Dane). With the release of her singles, and EP she began to generate a buzz in the music industry as a powerhouse vocalist and performer. She incorporated all she has learned and poured it into her debut album, "Anomaly", released in June 2021.

Her live performances have been imprinting the heart and soul of audiences across the U.S. and beyond. She leaves her heart on the stage.